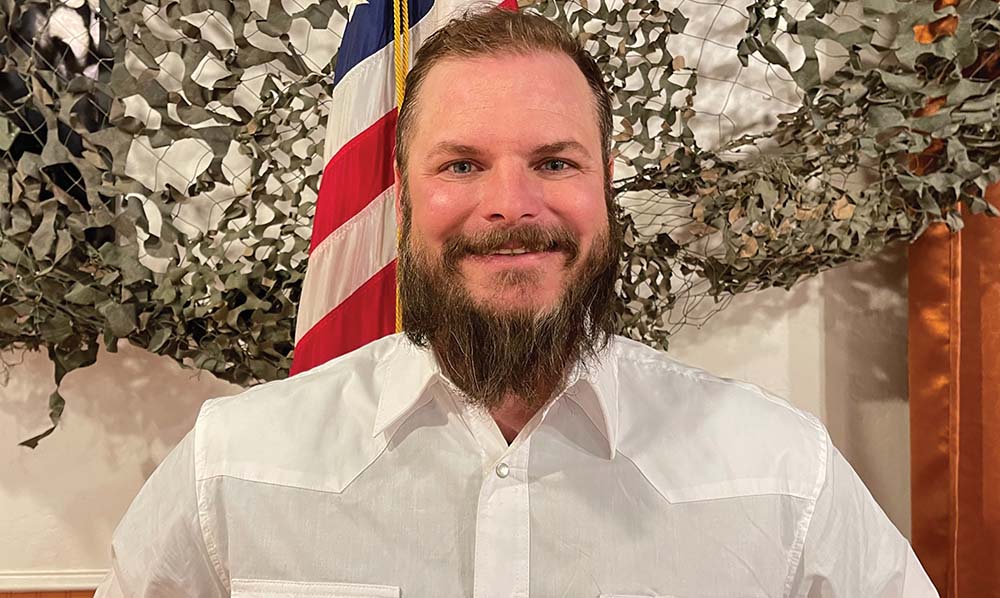 Chris Kennedy, a US Navy veteran who served enlisted active duty from 2000-2009 as an aircraft electrician and flight deck troubleshooter, understands the power of camaraderie, teamwork and patriotic duty. As the world continues to see bold international fights for freedom taking place, Kennedy speaks to the importance of relationship building and brotherhood – especially for veterans.
Kennedy, who is 39 years old, first pursued a leadership role with American Legion Post 34 in 2020 to help with by-laws and the constitution.

“I enjoy helping the American Legion,” says Kennedy. “It is a way to give back to my other fellow brothers and sisters in service, veterans and their families, and to ensure there is a place for veterans and their families to come to and reflect and engage in community so they don’t feel alone or forgotten. My goal is to show the community that the Legion is here for them. I hope to garner younger veterans to show them that the American Legion is not just group of older individuals that gather together, but rather a collaboration of people of different ages, from different industries and backgrounds whose common unique purpose is to help and provide avenues and information to veterans and their families that are seeking or in need of help.”

Today, Kennedy is the junior vice commander at Post 34 in Cave Creek. The Navy veteran worked with multiple squadrons from combat sea-going commands to testing evaluation of R&D systems, equipment and weapons and aggressor enemy squadrons.

Kennedy deployed three times: the first on the USS George Washington in 2002 in support of operation southern watch and operation enduring freedom. The second time took place in 2004 aboard the USS John F. Kennedy in support of Operation Enduring Freedom and Operation Iraqi Freedom. Between 2005 and 2007, Kennedy left combat sea commands to pursue testing and evaluation operations, equipment and aircraft systems and provide aggressor squadron support for flight tactics training.

The Post 34 veteran also deployed in 2009 on the USS Dwight D. Eisenhower in support of the global war on terror. At the end of 2009, he left the Navy to pursue a Bachelor’s of Science in Aeronautics at Embry-Riddle Aeronautical University in Daytona Beach, Fla.

Kennedy learned his trade in one of America’s great military services and turned it into a career for which he is eternally thankful and blessed. He understands well the value of education, strong leadership and relationships, but more importantly, the value of freedom. Get to know your local veterans.

American Legion Post 34 turns 75 this year and veterans have planned a year chock full of events, tributes, patriotism and the celebration of freedom. Faces of Freedom will produce a Korean War event from the era this May.

As part of an event planned for Saturday, May 21, 2022, American Legion Post 34 will invite veterans and the public to learn about the Post’s role during the Korean War, also known as the forgotten war.

The day begins with a brunch at 9 am, which will feature a Bloody Mary and mimosa bar and egg burritos. At 10 am, Post 34 will install its new officers for the coming year. Afterwards, the Town of Cave Creek will present Post 34 with the Local Landmark award for its long-standing role as a leader that helped shape the community. At 1 pm, Post 34 will feature Bill Johnson, well-known Bob Hope impersonator; the one-hour show will take place in its courtyard. Johnson has performed his tribute to the late, great Bob Hope across the US and the South Pacific to rave reviews. His tribute has been showcase at numerous events including as master of ceremonies, tributes to the troops and corporate gatherings. Tickets, which are $15 per show and $20 at the door, if available, can be purchased at the Post (after 10 am). Seating is limited. A BBQ, served by Top Hat Catering, will take place from 2:30-5 PM. In addition, Korean War veterans will be honored during the event, which wraps up with music by the Painted Cave Band from 2:30-7:30 PM.

“There will be nostalgia everywhere as we transport people back in time to places our veterans knew,” adds Brian Fernandez, Post 34 Legion commander. ”While we will share veteran stories throughout the years, we also will feature war eras and our veterans’ role in supporting freedom. For this event, Korean veterans are invited to attend so they can be honored by all in attendance.”