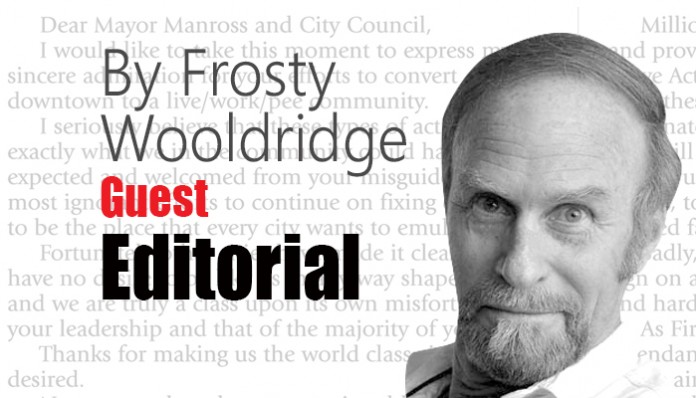 At too often intervals, you hear about the latest Muslim driver running down students before jumping out and slashing people with a knife at Ohio State University or you might read about the Islamic father in Rocky River, Ohio who shot his daughter in the head twice while she slept, known as an ‘honor killing’—but you rarely hear about the ongoing indoctrination of Islam in American schools.

This past week, a middle school in Chatham, New Jersey, utilized a cartoon video to teach the Five Pillars of Islam to seventh-grade students.  Two parents, obtained legal services to fight the school district over indoctrinating their children into the religion of Islam.

Seventh graders faced this video indoctrination: “May God help us all find the true faith, Islam…there is no god but Allah and Muhammad is his messenger.”

The parents said, “No other religion is taught nearly to this level of detail in the ‘world cultures and geography’ class.”

“To me that’s not education because in order to educate you need to teach about all [religions],” said Libby Hilsenrath, one of the two mothers pushing back against the class curriculum.   “Would they be comfortable teaching the doctrines of Christianity for example? Would you be comfortable in a public school to say ‘Jesus is the way and the truth and the life and no one comes to the Father except through me’? I don’t think so.”

Even more disconcerting, with America maintaining separation of church and state, the schools in New Jersey provide prayer rooms for Muslims.  Clearly this violates the U.S. Constitution.

Recently, both mothers interviewed on Fox News with Tucker Carlson.  They faced a community storm of name-calling from their neighbors.  It did not deter them.

“The promotion of Islam is worse than what the mothers presented to Tucker Carlson,” said Richard Thompson, president and chief counsel of the Thomas More Law Center. “After viewing one of the videos which the seventh graders were directed to watch, I can’t imagine any objective person saying this is not Islamic indoctrination.”

“Clueless school administrators across our nation are allowing this type of indoctrination to take place and it’s up to vigilant parents to stop it,” he added. “Libby and Nancy should have been praised, not pilloried.”

With each new Muslim imported into America, their votes grow, their rituals manifest, and their power expands.

Thompson exposed the propaganda cartoon video, “5 Pillars.”  It opens with two boys, one of them a Muslim, kicking a soccer ball.  The Muslim boy teaches the non-Muslim the 5 Pillars of Islam.

From that sugar-coated beginning, a new form of the Islamic conversion creed commences: “There is no god except Allah and Prophet Muhammad is His messenger.”

The cartoon ends with a sad non-Muslim boy, who suddenly smiles when the Muslim boy invites him to join him at the mosque for prayers.

“That is something the teacher can’t personally do, but does through the cartoon. Clever!” says Thompson.

Dear American reader—this kind of indoctrination accelerates with endless Muslim refugee immigration.  Notice that London, England no longer enjoys being “British.”  But in fact, harbors a Muslim mayor who promotes Sharia Law.  London features 423 new mosques and 100 Sharia Courts.  Muslims create parallel societies in every country they invade.  Once their numbers grow beyond the local population, they take over schools, laws and institute their political-economic-religious system.

This quote from the director of the Council for American Islamic Relations, Omar Ahmed, “Islam isn’t in America to be equal to any faith, but to become dominant. The Quran should be the highest authority in America, and Islam the only accepted religion on Earth.”

Ironically, the McCarran-Walter Act of 1952 specifically forbids any organization dedicated to the overthrow of the U.S. Constitution. Such an organization faces prosecution and deportation.  Thus far, no president has enforced it.

Dayanand Saraswati, Indian sage, said in 1883, “Having thus given a cursory view of the Koran, I lay it before the sensible person with the purpose that they should know what kind of a book the Koran is. I have no hesitation to say that it cannot be the work of either God or of a learned man, nor can it be a book of knowledge. Here its very vital defect has been exposed with the object that people may not waste their life falling into its imposition. The Koran is the result of ignorance, the source of animalization of human beings, a fruitful cause of destroying peace, an incentive to war, and propagator of hostility among men and a promoter of suffering in society. As to defect of repetition, the Koran is its store.”

Towns, cities and communities across America face one hell of a nasty ride!