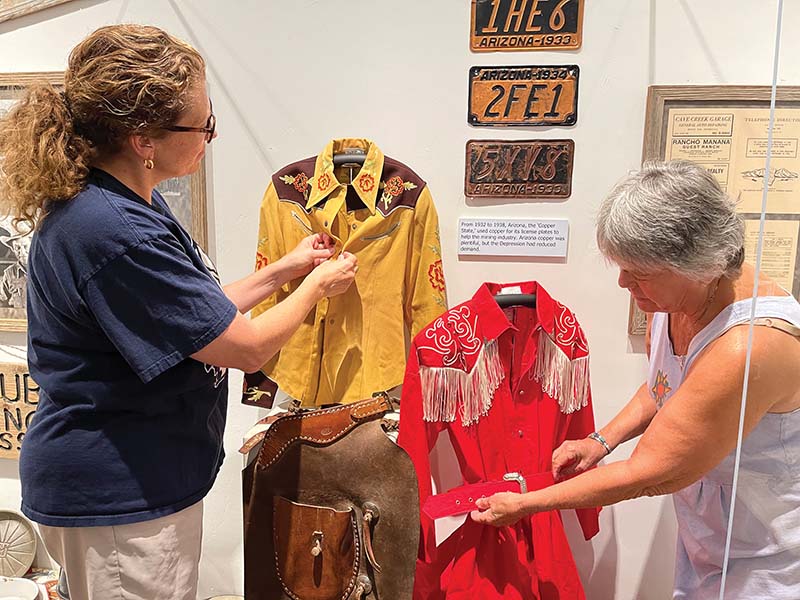 Cave Creek Museum staff and volunteers are working feverishly on the non-profit’s History Wing, a capsule that spans 1863 to present day. The museum’s many unique exhibits are being updated and readied for the museum’s new season, which begins October 1, 2022.

“As we prepare for our season opening, we are creating exhibits featuring the gold strike in Cave Creek in the mid-1800s,” says Johnson. “It all began with the discovery of the precious metal in the hills and mountains surrounding Cave Creek.”

As part of the summer remodel and enhancements, the western museum will display the challenges people experienced with regard to mining farming, ranching and just plain living. During the state’s early years, people had to learn – the hard way – how to live in the rugged Sonoran desert foothills, heat and with wildlife. Their life decisions were centered on the various types of rugged desert terrain statewide, long distances from one point to another, being able to transport oneself to other locations and the overall daily struggle for water.

Johnson says other exhibits under expansion include the story, in 2000, about how people in the Town of Cave Creek led a fight to keep a former dude ranch from being developed into a planned community.

“The History Wing also will showcase the Spur Cross Ranch Conservation Area, which because of its ongoing care, thrives with abundant flora, fauna and many pre-history archaeological sites that have been saved into perpetuity,” adds Johnson. “Guests will be amazed by all they will learn and understand about our special ecological area in Arizona.”
Cave Creek Museum is looking for volunteers to work with exhibits, like those in the History Wing, as well as joining in activities that are planned throughout the summer and upcoming season. Call 480.488.2764 for more information.

The 51-year-old museum’s mission is to preserve the artifacts of the prehistory, history, culture and legacy of the Cave Creek Mining District and the Cave Creek/Carefree foothills area through education, research, and interpretive exhibits. The Cave Creek Museum is located at 6140 E. Skyline Drive in Cave Creek, Ariz., 480.488.2764. Open October through May.