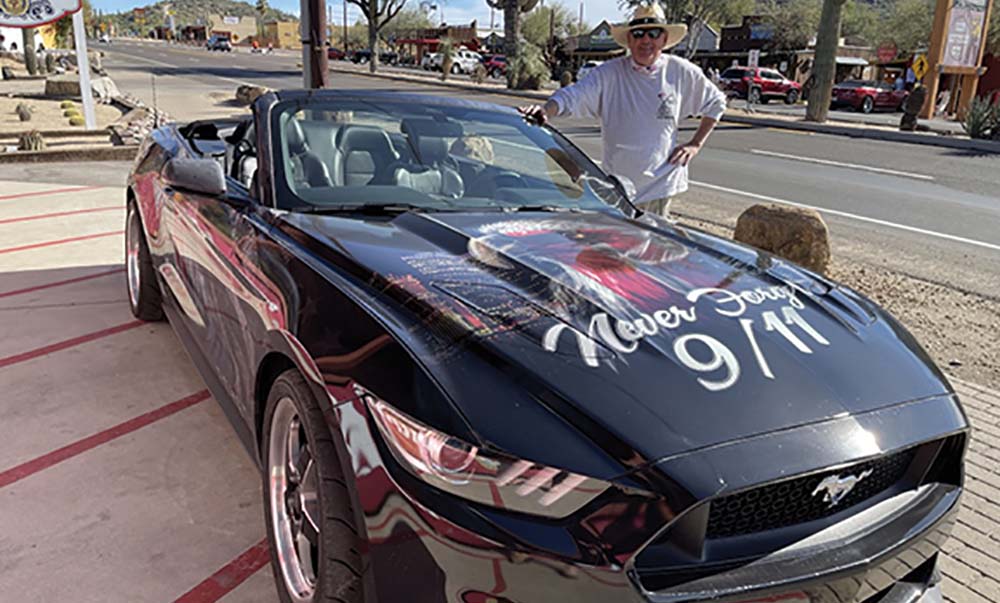 Bob Jenkins understands the true meaning of life after nearly losing his own on September 11, 2001 at the One World Trade Center in downtown Manhattan, N.Y. The day the terrorists struck, the four-year United States Marine Corps veteran was in a meeting with client Lehman Brothers on the 39th floor.

The veteran member of American Legion Post 34 had arrived the day prior to visit the NY Stock Exchange with his sales team. After a meal on September 10, the team rested to prepare for a meeting to sell videoconferencing equipment. After watching people funnel up the building’s elevators that beautiful day, Jenkins went through security and headed to the 40th floor.

During the meeting, there was an explosion. Jenkins, who served as a Marine Corps combat engineer and had extensive knowledge about explosives, kept calm as he felt the percussion come down through the building after the explosion.
“Time stopped,” says Jenkins. “Then the building began to rock back and forth. “The building felt like Jell-O and was swaying. I thought the stairways might come down.”

He left the conference room and found his way to the windows. Staring at the Statue of Liberty down below, Jenkins noticed white particles raining down in the cobalt blue sky.
“I stood there with my hands in my pockets and thought, this is where I am going to die,’ adds Jenkins. “It was odd, but I was in total peace.”

Suddenly, the building stopped moving. He heard a woman say there had been an explosion in a mechanical room three floors up. Jenkins went to the closest stairway and saw hundreds of people heading down the stairs. He joined the mass of humanity taking one step at a time but trying to go faster. It would take 40 minutes to get down the stairway where bottled-necked, frightened people tried to do the same. He didn’t know a jet had struck the building.
Next, he saw a number of brave firemen coming up the stairs, the chief and his lieutenant. They fought their way up 30 floors on the stairway to heaven.

“The stairs started filling out with heavy smoke and the smell of jet fuel,” says Jenkins. “I thought I was going to die on those stairs. Then I found an office where the air was clear. I was hyperventilating and hoping to ride it out there so I could go back upstairs to retrieve my equipment. The Lord then showed me out to the stairway where I made a life and death decision to go for it.”

As water and jet fuel came raining down, Jenkins tried to pick up the pace amongst the slow moving herd of people, but the stair traffic was slow and heavy. He finally made it to the mezzanine level and knew he was clear. Once outside of the building, he looked to his right and saw a smoldering jet engine and the wing from an airplane as a sea of humanity poured out of the building.

As he searched for his team members (finally locating them all during the day), his eyes focused on the plane’s massive rip in the building.

Worse, he watched a man jump off the building followed by a woman. He couldn’t watch any more suicides and got out of the location immediately. As he joined one team member to walk uptown, he heard news pouring out of everywhere.
Next, he heard that the Pentagon was hit. As they got closer to the Empire State Building, Jenkins saw the World Trade Center in the distance damaged and filled with smoke.

All of these images, especially the noise made by people jumping from the burning building and hitting the ground, are seared in his memory forever.

“Yes, I was lucky that day, but the truth is the terrorists tried to kill us all,” says Jenkins.
On an even stranger note, Jenkins later received a message from the World Trade Center police department who found his ID card in the rubble and sent it to him.

“That event was the most emotional thing that has ever happened to me,” adds Jenkins.
The impact on Jenkins was such that he was compelled and inspired to create a memorial wrap for his Mustang to commemorate his experience and those who were lost.
“We must never forget,” says Jenkins.

And, we never will.