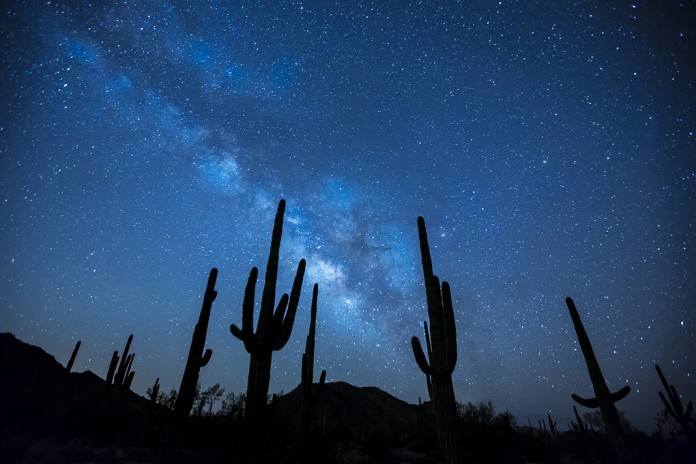 “There are 23 dark skies (communities) worldwide and six of them are in Arizona,” Hall said. Hall added that while Cave Creek is already doing a great job on conserving light, there is more they can do and introduced more ways they can rid light pollution.

One of the main mistakes Hall said cities and towns do, is they use light bulbs in street lamps that are very bright, have high sodium pressure and are uncovered. Low pressure sodium lights are the preferred light bulbs to use, however, the supply for it has gone down over the years due to the low demand. Hall said LED lights are becoming more popular and the best way to see if it will create too much light pollution is to look at the back of the packaging for the spectrum management.

“The broader the range of colors, the worse the dark sky is,” Hall said.

Hall added that light pollution does more than affect the residents of an area, but they also affect the animals around us.

“Baby sea turtles think the lights are the glare from the ocean, so the begin to go the opposite way of the water,” Hall said.

The astronomer said they are introducing small lights along trails, so people can still see without walking and it won’t affect wildlife.

Barentine said during his time in Cave Creek, he took the time to look around at the different types of lighting the town uses to see what needs to be done for the town to become IDA certified.

“We are already ahead of the game,” Barentine said. “By this time next year (certification) can all be done.”

Barentine maintained that in order for anywhere to become certified, the city, town or park needs to have more support than amateur astronomers, it takes help from all the residents. “I don’t think in the community it is impossible, it’s definitely possible,” Barentine said. Barentine stated that the more the IDA and residents can educate others, the more people will come along to the idea of being certified.

“Most people are understanding and don’t want to break the law,” Barentine said.

He added that more and more places around the world are becoming interested in becoming IDA certified, including: Europe and North America. “We want the whole world to know about Dark Skies.”

Once the town is certified, Barentine said the town will have their own page on the IDA, where they will document the progress of the skies. In order to keep the certification, they have to host two dark sky awareness events each year or include resources for the community to learn light expectations. The IDA also requires that there are at least ten construction projects completed to help the location reduce lighting.

“We recognize that Cave Creek might not need that many, but we will work with the town to figure out the amount,” Barentine said.

Both Barentine and Hall stated becoming certified is more than keeping the lights off.

“There will always be a light at the right time,” Barentine said.

To learn more about becoming a Dark Skies community visit the IDA website: