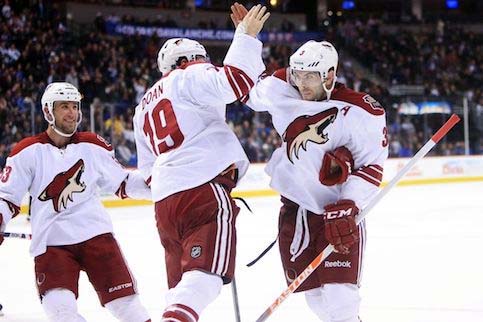 It has been a rocky road between the National Hockey League (NHL)’s Coyotes and the state of Arizona. While many setbacks have put the future of the franchise in question, we know for certain that the team will continue to call the Gila River Arena home for at least one more season.

The current Glendale-based arena that hosts the Coyotes invested $186 million in 2003 to build an arena intended specifically for the hockey team. Nine months ago, NHL Commissioner, Gary Bettman, expressed a desire to move the team if they did not get a new arena. Early estimates of this project would have been upward of $225 million. Due to budget restrictions, Phoenix legislatures did not sign off on this agreement, causing a riff between the NHL and the arena.

Part of the reason for a lack of funding for a new arena is due to how much money the Coyotes franchise is losing. According to Forbes, is the least valuable franchise in the NHL. They lost $19 million last season bringing their net value to around $300 million. In order to cut costs, the team released long time captain, Shane Doand from contract and gave a pink slip to the Coach, Dave Tippet.

While the Coyotes were figuring out where they were going to call home for the upcoming season, speculation circled that the team would move to either Seattle or Houston, who are both looking to bring a hockey franchise onboard.

As of right now, the Coyotes are on an auto-renewal agreement with its current home at the Gila River Arena. The team had until December 31, 2017 to let the arena manager, AEG, know if they were going to move to a new facility. Otherwise, both parties would enter a new agreement at the start of the New Year. However, the speculation is now put to rest because the Coyotes are signed on for at least one more season.