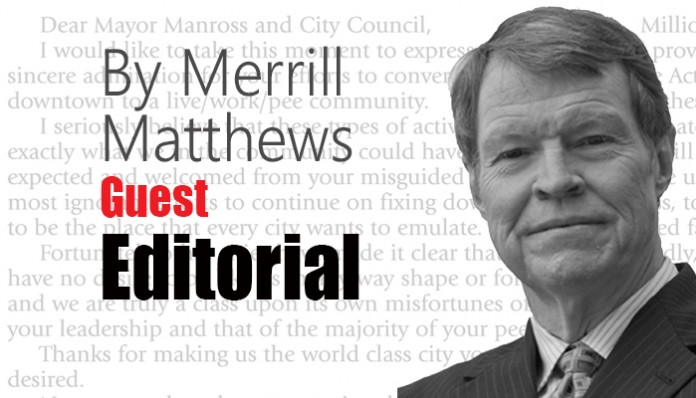 While President Donald Trump wants to cut taxes, there are others who hope to raise them — by taxing carbon.

The idea has long been supported by environmentalists and left-leaning groups, but recently it has found support among some establishment Republicans. The notion is that by taxing carbon, the country would use less, reducing our impact on climate change.

However, there are a number of problems with the plan.

There is no viable alternative to carbon-based fuels. The goal of a carbon tax is to force people to embrace substitutes, but fossil fuels are one of the most inelastic products. There just aren’t any viable and scalable alternatives.

If the price of gasoline were to rise significantly because of a carbon tax, some people would carpool or take public transportation, but the vast majority would just have to suck it up and pay the higher price.

The price of everything would rise. Economic theory says that corporations don’t pay taxes, people do. Companies pass along taxes to consumers in the form of higher prices.

Because we would still have to use fossil fuels for the vast majority of our travel, transportation and power generation, a carbon tax would simply be priced into virtually every product and service.

Food must be harvested, processed and transported to grocery stores. Clothes and consumer goods must be manufactured and transported to retail outlets or to consumers’ homes. Planes, trains and long-haul trucks cannot run on solar or wind power. Neither can our military.

Thus a carbon tax would have little impact on carbon use and a big impact on what we pay for everything.

For example, Norway passed a carbon tax in 1991. They concluded, ” the carbon tax effect on emissions was modest. … This surprisingly small effect relates to the extensive tax exemptions and relatively inelastic demand in the sectors in which the tax is actually implemented.”

Australia became the first country to repeal its carbon tax. When the repeal passed in 2014, Prime Minister Tony Abbot said, “Today the tax that you voted to get rid of is finally gone, a useless destructive tax which damaged jobs, which hurt families’ cost of living and which didn’t actually help the environment is finally gone,” according to the Wall Street Journal.

That’s why corporate income tax reform along the lines of that proposed by President Trump or House Speaker Paul Ryan is so important. A carbon tax that raises the cost of production across the economy will make it harder for businesses to compete globally.

The good news is that the U.S. has been reducing energy-related carbon emissions without a carbon tax. U.S. Energy Information Administration announced last October that energy-related carbon emissions for the first six months of 2016 were down to their lowest level since 1991. That’s in large part because fracking has made natural gas a cleaner and more affordable option than coal.

The country needs policies that help the U.S. become more competitive. Lowering the tax burden is the best way to achieve that goal.