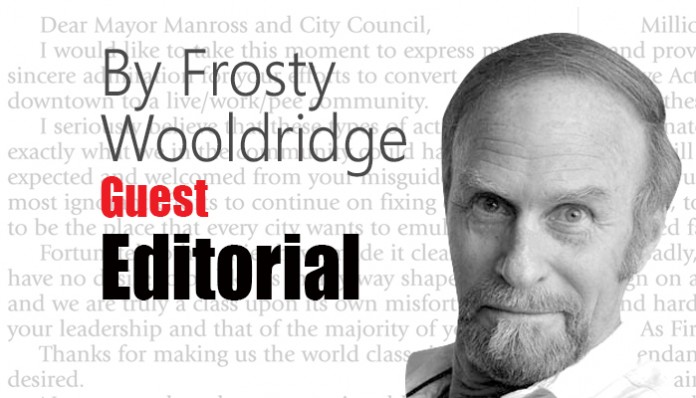 As immigration, both legal and illegal, continues flooding into the United States of America—it also pours into Canada, Australia and Europe. Note that all Western countries stabilized their populations since 1970 by averaging 2.0 children or less per female.

Unfortunately, as first world countries created stable and sustainable societies since 1970, their leaders chose unending immigration from overloaded third world countries. For the United States, the late Senator Teddy Kennedy created the 1965 Immigration Reform Act that added 100 million people to America by October of 2006. If continued, that same act expects to add another 100 million people within 34 years. Where do those immigrants originate? Answer: the third world that adds 80 million, net gain, annually.

Unknown to most countries and people living on this planet, an accelerating birthrate in Africa threatens all Western civilizations in the 21st century. At 1.1 billion in 2016, Africa screams toward 2.1 billion by 2050 and 4 billion by the end of this century. (Source: “Africa’s Population Projections” by United Nations 2016)

Ironically, Egypt imports most of its food to feed its current population in 2016. As the human race adds 1 billion more people, net gain, every 12 years, Africa expects to quadruple its population within 85 years. Africans grow so fast; they cannot water, feed, house, educate or sustain the expected 4 billion people about to land on that continent.

What does it mean? It means that every living creature featuring feathers, hooves, claws, fins or fur that lives in Africa will become food for the human mob. It means relentless extinction of rhinos, lions, gazelles, wildebeest, giraffes and elephants—and, well, just about any creature that breathes.

Nonetheless, the Pope condemns birth control in Africa. Islam promotes as many children as possible as it expands across the globe by birthrate and/or violent jihad. World leaders see the carnage, poverty, disease and futility of Africa in 2016, but fail to call for a world conference to discuss what’s coming and what can be done to change course.

Therefore, those burgeoning populations flood into first world countries with no end to the line.

Question: what will humans do once the planet faces another added three billion people by 2050—a scant 34 years from now? They will need to be watered, fed, housed, warmed and sustained in a finite world with finite resources. If you think the flood of 1,000,000 (million) refugees knocking on Europe’s door today spells disaster for the civilized West, what do you think any Western country faces in the next 84 years when Africa hits four billion desperate people?

Right now, America annually imports 1.2 million legal refugees from around the world. According to www.cis.org with research by Dr. Steven Camarota, the illegal alien flow jumped back to 500,000 illegal alien border crossers in 2014-2015. In other words, the line never ends as Mexico remains on course to add another 20 to 30 million people by mid century.

One look at Minneapolis, Minnesota shows 105,000 African Somalian legal refugees now overwhelming welfare services across that city. Yet, Somalia at 11.1 million in 2016, expects to reach 13.1 million within six years by 2020.

“The country is rapidly expanding with almost 3% annual population growth and a high fertility rate of 6.26 children per woman, which is the 4th highest in the world.” (Source: United Nations.)

Question to ask yourself and your kids: what is the point of endless immigration from Somalia in 2016 when that country, along with the rest of Africa, refuses to solve its own birth rates? What’s the point of adding more of their people to our country so we become like their country?

How do you think your kids will survive the onslaught? What are you doing to raise a national-international discussion on human overpopulation? What kind of a civilization do you expect to bequeath your children? Answer: if we continue on this path, we will become a new third world country where everyone suffers and no one may lead anything like “quality of life” or a decent standard of living. Not to mention a degrading environment!

None of us will escape the growing consequences of Africa’s population bomb.

Part 2: India expects to jump from 1.252 billion to 1.55 billion within 34 years. It adds 16 million, net gain, annually. Today, Indians flood into America with chain migration and added birth rates. Indians do not believe in birth control. Their human misery index explodes off the charts. Let’s take a look at what it looks like.

Part 4: Recipient Nations of Population Overload: United States, Canada, Europe and Australia. No one escapes this human juggernaut. Those 3 billion people added onto this planet within the next 34 years will invade first world countries. Let’s take a look at what that means for America.

If you don’t want a Paris, France, San Bernardino or Orlando event in your community, it’s time to call for a total “Immigration Shutdown Now.”

(Permission to republish this population graph by Roy Beck, www.NumbersUSA.org )

Muslims cannot in any way become Americans. The Koran forbids it. Their entire context of religious-political Sharia Law demands subjugation to their religion with no allegiance to the U.S. Constitution. The Koran forbids women’s rights, marital choice, free speech, gay rights and religious rights. Our way of life remains completely out of bounds to Islam. This 4-minute video explains our plight:

That’s why you need to take action. Send this series to everyone in your network. Educate them. Urge them to take action by joining these websites to become faxers of prewritten letters and phone callers. We must force Congress into an “Immigration Shutdown Now!”

In a five minute astoundingly simple yet brilliant video, “Immigration, Poverty, and Gum Balls”, Roy Beck, director of www.numbersusa.ORG, graphically illustrates the impact of overpopulation. Take five minutes to see for yourself:

“Immigration by the numbers—off the chart” by Roy Beck

This 10 minute demonstration shows Americans the results of unending mass immigration on the quality of life and sustainability for future generations: in a few words, “Mind boggling!” www.NumbersUSA.org